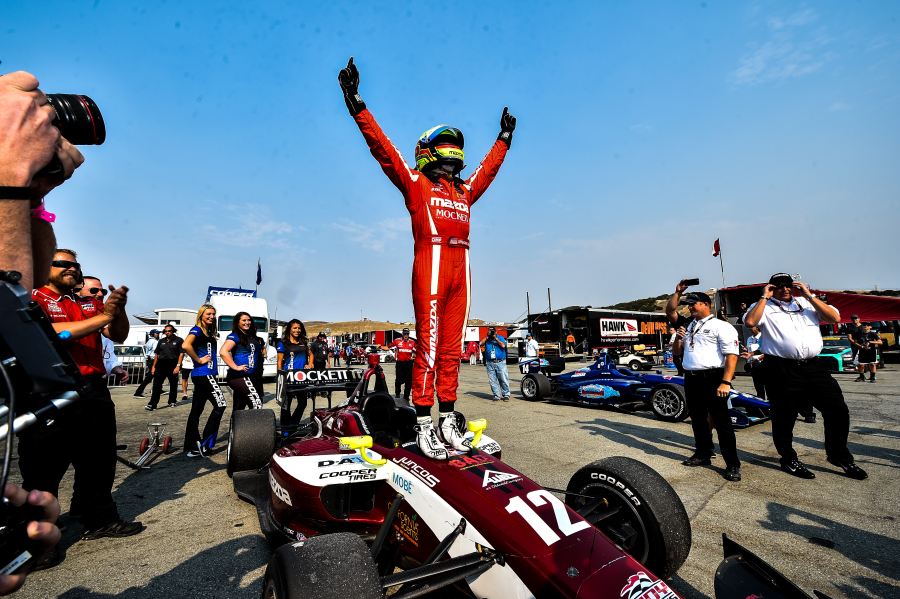 The final weekend of the 2015 Indy Lights Championship Presented by Cooper Tires proved to be one of the most intense battles in the Mazda Road to Indy championships this season. Rookie Spencer Pigot delivered Juncos Racing their first Indy Lights championship by winning both Rounds 15 and 16 at Mazda Raceway Laguna Seca this past weekend. Teammate and fellow rookie Kyle Kaiser picked up his highest finish of the season taking second in Round 15.

The weekend at Mazda Raceway began with two test sessions, followed by two practice sessions on the 2.238 mile, 11-Turn road course. Kyle Kaiser (Santa Clara, California) topped the charts for both test sessions along with the first practice session. Juncos Racing then went on to show the strongest qualifying efforts by any team on Saturday morning, with Kaiser taking the second starting position and Pigot qualifying third.

A tight battle for the championship went into full effect for Round 15 during the first half of the race. Pigot (Orlando, Florida) took the lead after three laps, where he went on to claim the win, moving him eight points ahead of championship contender Jack Harvey. Kaiser picked up his best result of the season, giving Juncos Racing their first 1-2 finish in the series.

The following day Pigot earned the second starting position while teammate Kaiser took the third grid position. Juncos Racing would again prevail with Pigot capturing the win in the season finale, Round 16, of the championship. Pigot’s win marks the first Indy Lights Championship for the Juncos Racing since expanding into the Indy Lights series earlier this year.

By winning the 2015 Indy Lights Championship American Spencer Pigot, driver of the #12 MAZDASPEED scholarship car, has earned a one million dollar scholarship to the Verizon IndyCar series, where he will be eligible to run for the 100th Indianapolis 500. Pigot’s impressive rookie season includes six wins, four poles, and 10 podium finishes.

“It’s been a fantastic year with Juncos Racing,” said Pigot. “They’ve worked so hard for me and it’s great to be able to win this championship together. It was a perfect weekend being able to win both races at Mazda Raceway as the Mazda Scholarship driver for Indy Lights. I wouldn’t be here without the support of Mazda, Cooper Tires, Mockett, Rising Star Racing, The Stutz, MOBE and BAD. I can’t wait to see what the off season brings and to become a Verizon IndyCar series driver in 2016.”

American Kyle Kaiser, driver of the #18 InterVision/NetApp/JuniperNetworks car, was pleased to end the season with a season high second place finish. Kaiser recorded two podiums, along with six Top-5 finishes during his rookie year.

“What an end to the season,” said Kaiser. “The team gave me a great car rolling off the trailer and we never looked back after the first session. I had my best finish of the year, and it’s a great way to end the season and head into next year. I’m so thankful for everyone on the team working so hard and it’s icing on the cake for my teammate to win the championship. During this offseason I’ll be training harder than ever before to prepare for next year, to continue with the success we have built.”

Team Principle Ricardo Juncos believes the success achieved by Juncos Racing during their first full season in the Indy Lights series would not have been possible without the right group of people.

“Our survival in the series depended upon our success,” said Juncos. “We came into the season with a clean slate, the right drivers, and the same mentality that drove our success in Pro Mazda in 2014. This year’s competition was the toughest that we’ve faced in our history. Our growth brought new talent to our organization, but our unique team chemistry was the true backbone behind our victory. I cannot express how proud I am of Spencer (Pigot) for winning this championship. Our history goes all the way back to his early karting days and to now see him pick up his second championship with the team is more than I could have ever asked for. Kyle (Kaiser) has done an outstanding job this season, even though not all of the results show this. Ending the year in front of his hometown crowd with a season high second place finish is exactly what we have worked for. We truly have a great group of people who have worked so hard to create so much success. I want to thank everyone who has supported us along the way.”