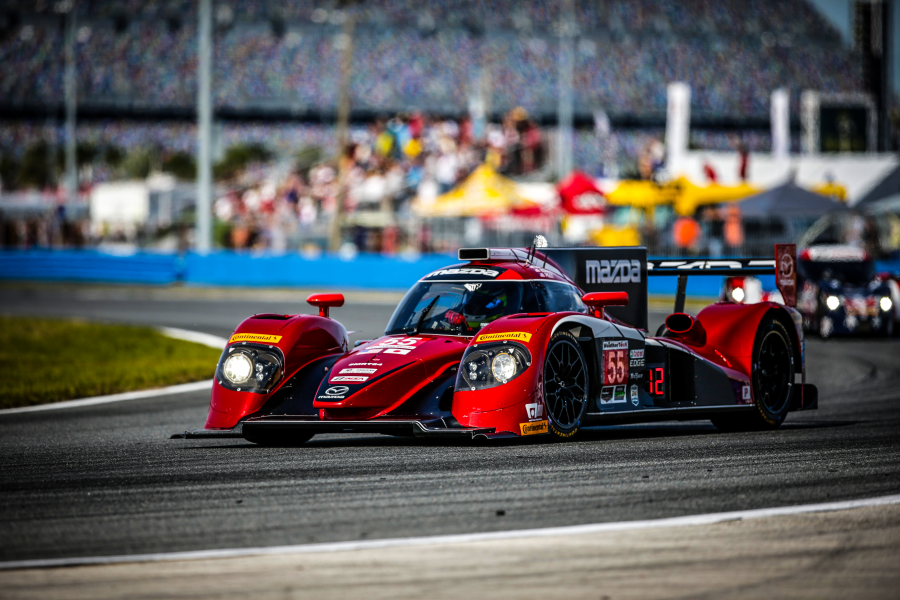 IRVINE, Calif. (January 6, 2016) – Mazda Motorsports has two categories of driver development programs that support drivers on their way to the top of North American auto racing. The Mazda Road to 24 (#MRT24) is a ladder system for sports car racers while the similar Mazda Road to Indy (#MRTI) provides driver scholarships in the open-wheel ranks. For the Rolex 24 at Daytona, those two categories come together as Indy Lights champion Spencer Pigot will join the Mazda Prototype team. Veteran sports car racer Ben Devlin will also join the team for the third consecutive year at Daytona.

The 22-year-old Pigot is the first driver to ever win four Mazda development scholarships as he climbed from grassroots racing to the top of the open-wheel ladder. He will join the Mazda Prototype No. 55 team at Daytona, pairing with full-season drivers Jonathan Bomarito and Tristan Nunez. Following several lower-level championships with Mazda backing, Pigot won the Pro Mazda championship in 2014. The title earned him the scholarship to progress up to Indy Lights in 2015, where he won six races and the championship in his rookie season. With the Indy Lights championship, Pigot earned the $1 million Mazda scholarship, entitling him to three IndyCar races, including the historical 100th running of the Indianapolis 500 with the Rahal Letterman Lanigan Racing team. “The Mazda Road to Indy has been very important to my development as a driver,” said Pigot. “The cars within the ladder system train you to compete at the top levels of motorsport. Because I had done a full season with the Indy Lights car with Mazda turbo power, I was able to get comfortable with the power and downforce of the Prototype pretty quickly. Driving in the Daytona 24 Hours is a new experience for me which I’m very excited about. Mazda have been a huge part of my career and I can’t thank them enough for the opportunity to drive in the Rolex 24.”

Ben Devlin, 33, of Norwich, England will again join the Mazda Prototype team at Daytona. Devlin has an extensive sports car and prototype resume, including the 24 Hours of Le Mans as well as many starts in the Grand Am Series, American Le Mans Series and the IMSA WeatherTech SportsCar Championship. In 2009, Devlin teamed with Marino Franchitti and Butch Leitzinger in a Mazda Prototype to win the LMP2 category at the Petit Le Mans at Road Atlanta. He will drive the No. 70 car with full-season co-drivers Tom Long and Joel Miller.

“My expectations are always high at the beginning of year,” said Devlin. “But this year I think is going to be one to remember. I know I’m the old guy, but I can fill my role after driving these type of cars for over 15 years. I want to pass my experience on to the young guns, and I believe I still have the speed and, most importantly, consistency to help the team succeed.”

Mazda Motorsports
Mazda Motorsports boasts the most comprehensive auto racing development ladder system of any auto manufacturer in the world. The Mazda Road to 24 program offers a number of scholarships to advance drivers up the sports car racing ladder which culminates in the Mazda Prototype team that races in the top level of IMSA sports car racing in North America. The Mazda Road to Indy is a similar system in open-wheel racing, which includes USF2000, Pro Mazda and Indy Lights racing categories with Mazda power. The new Global MX-5 Cup car makes its debut in 2016, with affordable, turnkey race cars available direct from Mazda. In the grassroots categories, more Mazdas road race on any given weekend in North America than any other manufacturer.

Mazda North American Operations is headquartered in Irvine, Calif., and oversees the sales, marketing, parts and customer service support of Mazda vehicles in the United States and Mexico through nearly 700 dealers. Operations in Mexico are managed by Mazda Motor de Mexico in Mexico City. For more information on Mazda vehicles, including photography and B-roll, please visit the online Mazda media center at http://www.mazdausamedia.com