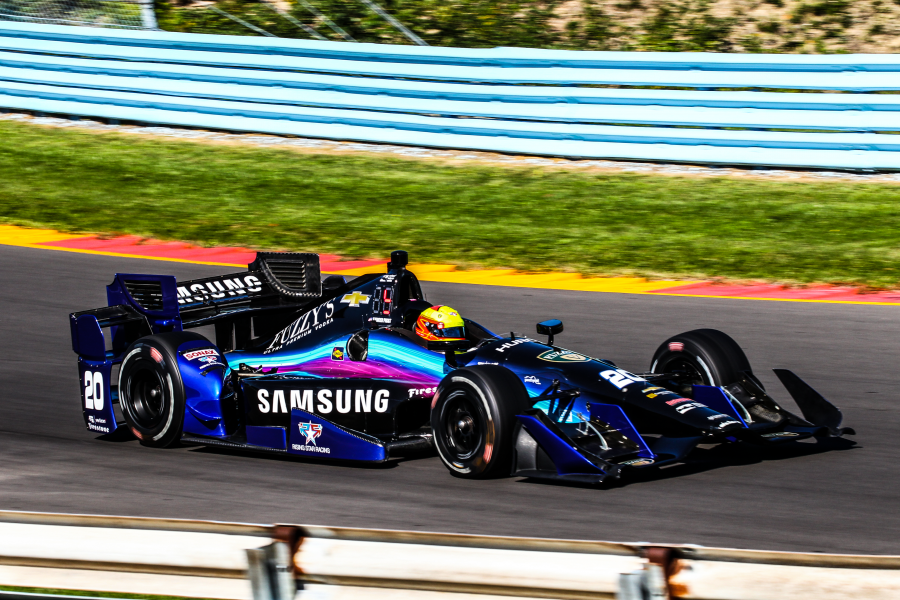 WATKINS GLEN, N.Y. (Friday, Sept. 2, 2016) – Samsung, a multinational conglomerate company headquartered in Seoul, will support Spencer Pigot and his No. 20 Ed Carpenter Racing entry for the INDYCAR Grand Prix at the Glen and the GoPro Grand Prix of Sonoma.

Pigot, a 22-year-old from Orlando, Fla., has earned two top-10 finishes in his rookie Verizon IndyCar Season with Ed Carpenter Racing after claiming the Indy Lights Presented by Cooper Tires Championship in 2015.

“I’m really excited to have Samsung on the No. 20 car for Watkins Glen and Sonoma,” Spencer Pigot said. “This is a massive company with global reach, and I’m glad we were able to put this together with the help of my sponsor Rising Star Racing. Ed Carpenter Racing is a world class team and it’s a real honor to have a company with worldwide name recognition on one of our cars.”

“Samsung is thrilled to partner with Spencer Pigot and the No. 20 car for Watkins Glen and Sonoma,” Matt Smith, Vice President of Samsung Business said. “It takes passion, grit and pure talent to be great and Spencer clearly has what it takes to be great at racing. We are excited to support Spencer with the help of Rising Star Racing and Ed Carpenter Racing.”

Headline Photo
Rising Star Racing (RSR) has matched corporate sponsors with a very select group of open-wheel drivers since 2014, and bringing Samsung on board is another win for the organization.

“RSR works to pair the best young drivers in American open-wheel racing with companies that view these drivers as valued assets that can help them grow their businesses,” said Art Wilmes, Principal and Founder of Rising Star Racing. “Samsung has chosen to partner with RSR, and particularly Spencer Pigot for the rest of the race season. The RSR model is unique, but our efforts continue to be successful. We’re happy to be a small part of the Verizon IndyCar Series supporting both Spencer Pigot and Josef Newgarden.”

The Samsung livery can be seen on Spencer Pigot’s No. 20 Ed Carpenter Racing Chevrolet for the INDYCAR Grand Prix at the Glen on Sept. 4 and the GoPro Grand Prix of Sonoma on Sept. 18. Both races will be broadcast on NBC Sports Network.

For more information on Samsung and Rising Star Racing, visitsamsung.com/business and risingstarracing.com.

ABOUT SAMSUNG ELECTRONICS AMERICA, INC.:
Headquartered in Ridgefield Park, N.J., Samsung Electronics America, Inc. (SEA), is a recognized innovative leader in consumer electronics, mobile devices and enterprise solutions. A wholly owned subsidiary of Samsung Electronics Co., Ltd., SEA is pushing beyond the limits of today’s technology and providing consumers and organizations with a portfolio of groundbreaking products in appliances, home entertainment, Internet of Things, mobile computing, smartphones, virtual reality, wireless infrastructure and wearables, in addition to offering leading content and services related to mobile payments, 360-degree VR video, customer support and more. Samsung is a pioneering leader in smartphones and HDTVs in the U.S. and one of America’s fastest growing home appliance brands. To discover more about Samsung, please visit http://www.samsung.com. For the latest Samsung news, please visit news.samsung.com/us and follow us @SamsungNewsUS.

ABOUT RISING STAR RACING:
Motorsports relies on funding as much as fuel – that much will eternally be true.

Originally, wealthy team owners – or those who had acquired team sponsors – hired the best driver available. In most cases, that is no longer true. Drivers are now often expected to bring a significant portion of the operating budget to the team. This inequity favors funding over talent, so the best drivers aren’t always in the best cars – or any car.

RSR has a unique mission in the world of motorsports: to help ensure that the most deserving drivers get the opportunities they have earned. RSR subscribes to the ideal that world-class talent, hard work, dedication and desire should rise to the top in motorsports just as they do in most other sports.

ABOUT SPENCER PIGOT:
Spencer Pigot is the most successful driver to compete in the Mazda Road to Indy, winning 24 races across Indy Lights, Pro Mazda and USF2000 competition. 2016 is Pigot’s rookie season in the Verizon IndyCar Series. He competed at St. Petersburg and in both the Angie’s List Grand Prix and Indianapolis 500 for Rahal Letterman Lanigan Racing before joining Ed Carpenter Racing for the remaining road and street course events. Pigot caught the attention of IndyCar teams in 2015 when he won six races as an Indy Lights rookie on his way to collecting the championship.