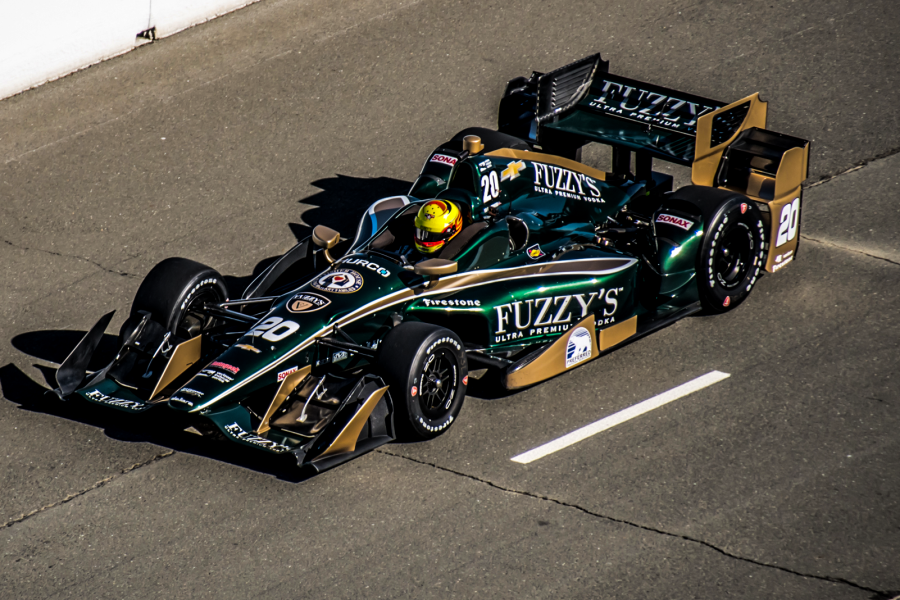 (SPEEDWAY, Ind.) January 17, 2017 – Ed Carpenter Racing announced today that Spencer Pigot will retain his duties as the road and street course driver for the No. 20 Chevrolet for the 2017 Verizon IndyCar Series season. After joining ECR partway through 2016 in the same role, Pigot will be behind the wheel of the No. 20 at non-oval events for the entirety of the 2017 season. The only owner/driver in the series, Ed Carpenter, will continue to pilot the No. 20 Fuzzy’s Ultra Premium Vodka Chevrolet at all oval races.

“I’m very excited to be staying with Ed Carpenter Racing for the 2017 season,” Pigot stated. “It’s a great feeling to know that I have a secure ride for all of the road and street course races so we can start preparing for the season now. I can’t thank everyone at ECR, P1 Management and Rising Star Racing enough for their help getting this deal done.”

The 23-year-old from Orlando, Fla. graduated to the Verizon IndyCar Series last season after winning the 2015 Indy Lights championship. The title came with a guaranteed three-race IndyCar program, which Pigot ran in a Rahal Letterman Lanigan Racing Honda. Following the Indianapolis 500, Pigot transitioned to the Chevrolet-powered ECR team.

Pigot competed in the remaining seven road and street course events for ECR, scoring two Top 10 finishes along the way. In only his second event weekend in the No. 20, his ninth-place finish at Road America was the highest of all rookies. A career-best finish of 7th came at Mid-Ohio, where he was also the top-finishing ECR car. He took the checkered flag in nine out of ten races his rookie year, his streak broken only at the season finale when a mechanical issue sidelined him from competition. Pigot worked on improving from his qualifying attempts each weekend, gaining an average of six positions in every race he finished.

“I learned a lot in my rookie year and I’m looking forward to the opportunity to build on that experience. I know I have the team around me to fight at the front and that’s what we’ll be trying to do in 2017,” said Pigot.

Team owner Carpenter is looking forward to sharing the No. 20 with Pigot. “We are happy to have Spencer back. It was a challenging situation for him to step into the team last year mid-season as a rookie. We believe that Spencer has the potential to be a contender in this sport and we will continue to focus on maximizing that potential,” remarked Carpenter. “It is great to have some offseason left to allow us to continue that development before the season kicks off. We are anticipating a strong sophomore campaign from Spencer.”

As the winningest driver in the Mazda Road to Indy, Pigot earned four scholarships from Mazda to continue his career’s momentum towards the Verizon IndyCar Series. In five years, he won four championships and 24 races in USF2000, Pro Mazda and Indy Lights. Pigot is now part of a very select group of young open-wheel drivers aligned with Rising Star Racing, an organization whose mission is to ensure the most deserving drivers get the opportunities they have earned by matching them with corporate sponsors. Pigot is represented by P1 Management, LLC, who worked with RSR to finalize the agreement with Ed Carpenter Racing.

Barry Pigot, Managing Member of P1 Management commented, “Today’s announcement that Spencer is going to continue driving for Ed Carpenter Racing in the 2017 Verizon Indy Car Series is an exciting day for all of us at P1 Management and Rising Star Racing. Thanks to Art Wilmes, Drew Coomes, Ed Carpenter and Floyd Robinson who have worked so hard to make this happen. P1 Management is proud to continue its major role in managing and advancing Spencer’s career as it has done since 2009.”

Pigot will be in the No. 20 for the first time this year when he joins Hildebrand for a test at Sonoma Raceway on February 7. Prior to climbing back in an Indy car, Pigot will compete in the Rolex 24 at Daytona on January 28 and 29 with Mazda Racing. The 2017 Verizon IndyCar Series season will open in St. Petersburg, Fla. on March 12.

About Ed Carpenter Racing
Ed Carpenter Racing (ECR) first entered the Verizon IndyCar Series in 2012. The team is led by IndyCar’s only owner/driver, Ed Carpenter, winner of back-to-back pole positions for the Indianapolis 500 in 2013 and 2014. ECR has amassed seven victories and over 20 top five finishes in the its first five years. In 2017, Carpenter will compete in all oval events in the No. 20 Fuzzy’s Ultra Premium Vodka Chevrolet while Spencer Pigot will take over at road and street course races. JR Hildebrand will compete for the Verizon IndyCar Series championship as he races the No. 21 Chevrolet throughout the entire season. More information on Ed Carpenter Racing may be found at http://www.edcarpenterracing.com.