Another Podium Finish For the Mazda Prototype Team 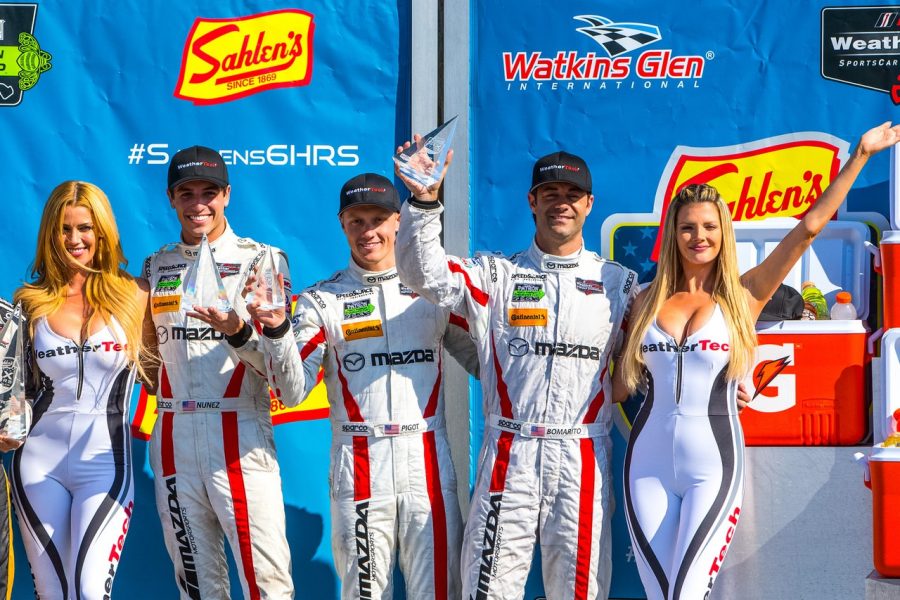 WATKINS GLEN, New York (July 2, 2017) – The No. 55 Mazda Prototype car was never the fastest on the race track at Watkins Glen International for the Sahlen’s Six Hours of the Glen, but with nearly flawless execution by the drivers and pit crew and an ever-improving car, they finished third in the IMSA WeatherTech SportsCar Championship race today. This marks the second-straight podium finish for the Mazda Prototype team, which is a first. (The No. 70 Mazda was third at the previous race in Detroit.) Tristan Nunez qualified and then started the race before handing over to Jonathan Bomarito. With quick and consistent pit stops, the team made it’s way forward from a ninth-place starting spot. IndyCar racer Spencer Pigot drove a triple-stint in the middle segments of the six-hours, eventually taking the race lead on an exchange of pit stops. With a little more than an hour remaining, he handed off to Bomarito for the spirited final sprint to the finish. The trio covered 200 laps of the 3.4-mile road course in the six-hour race.

It wasn’t such a successful day for the sister car, the Castrol Edge/ModSpace No. 70 Mazda with drivers Joel Miller, Tom Long and Marino Franchitti. After a penalty at the start of the race (for having to change tires on the grid), Joel Miller sliced through most of the field to rejoin the Prototype battle at the on-hour mark, only to have the car lose speed due to a mechanical failure that hampered the turbocharger. After attempting repairs, the car was retired from the race.

The goal of three consecutive podium finishes is ahead next weekend at Canadian Tire Motorsport Park (CTMP) for round seven (of 10) in the WeatherTech Championship.

Jonathan Bomarito, driver, No. 55 Mazda Prototype
You ran a segment in the early hours of the race, but you really excelled by driving the final hour. What was it like to keep setting your fastest lap over and over?
“I was in a good rhythm. Everybody was doing a great job, so the whole team was in a good rhythm. For me, the spotters were giving me good information when we had light sprinkles coming down. When you see that as a driver, it gets real sketchy and gets your attention. So the spotters Daniel (Trembley) and Andrew (Carbonell) did an amazing job for me. Zach (La Grone, chief strategist) and everyone on the [pit] box was giving me the information I needed. I just had to put my head down. The team kept giving me the gap back to the fourth-place [No. 52] car, which was really quick. I ran my fastest laps of the race right at the end by pushing really hard. My teammates did an awesome job. Tristan started us off and Spencer did a long one in there that allowed me to just do a double stint at the end. I can’t thank everybody enough. It’s good for Mazda with another podium. The most important thing is we improved the car which is a big help for the next race.”

Tristan Nunez, driver, No. 55 Mazda Prototype
“I had the beginning of the race, the first couple of hours, so I was focusing on being smooth and not making any mistakes while passing the GT cars we were lapping. I was really focusing on bringing it back clean to Jonathan for the second segment. Those guys did an incredible job. Jonathan closing it out and Spencer’s triple-stint was really fun to watch from my point of view. It’s great to keep clicking-off podiums and it’s onwards and upwards to CTMP.”

Spencer Pigot, driver, No. 55 Mazda Prototype
“It was really fun out there. I thought we made a lot of improvements throughout the weekend and then showed it in the race. Obviously, we were running a lot higher than we had been (in practice and qualifying). And then we ran in the top-three pretty much the entire second half of the race. That’s a nice feeling. The car was good and the guys did an awesome job on all of the pit stops. They were flawless and I’m happy to get Mazda back on the podium.”

Joel Miller, driver, No. 70 Castrol Edge/ModSpace Mazda Prototype
“We were a second quicker during the race than we were in qualifying, so it shows how much we improved the car. It was unfortunate to get a penalty, but we had time to come back and the car rock-n-rolled pretty good. I was picking them off and getting back in the game with the other Prototypes. Then we decided to extend my stint to a triple, I really had the rhythm going so it wasn’t a problem. It was just suddenly no power and we had to call it a day. I’m just bummed. The good thing is a good result for the other guys. We showed some better race pace and we’re closer, obviously, seeing how both cars ran. We still have got something to gain for next weekend, and the cool part is we don’t have to wait a month to race again.”

Tom Long, driver, No. 70 Castrol Edge/ ModSpace Mazda Prototype
“It’s tough for sure [to drop out early in the race]. I was excited about the day because our Mazda guys worked so hard this weekend and Joel had a fantastic opening stint. It was looking really good for our Castrol/ModSpace Mazda. Unfortunately it wasn’t our day but I’m so happy that the 55 car was able to pull through for a podium. It’s exciting to see back-to-back podium results and the good news is we push forward to next week. We get another shot at it at CTMP, a quick track which should suit our Mazdas well.”