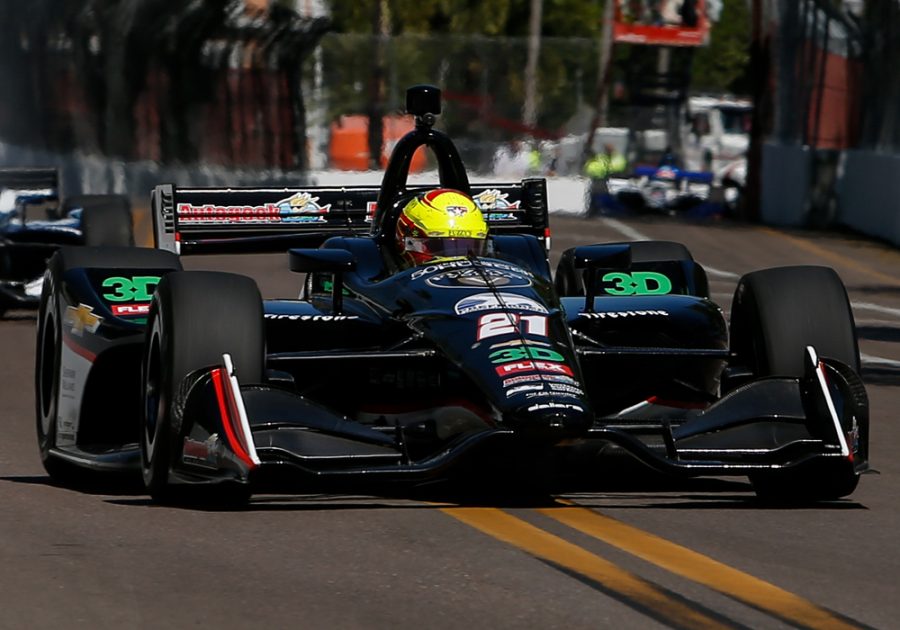 – The finishing position for Ed Carpenter Racing’s Spencer Pigot was not indicative of the speed the 24-year-old had today in the season-opening Firestone Grand Prix of St. Petersburg. True to the form he became known for during the 2017 season, Pigot executed over 20 on-track passes for positions and ran as high as second before falling a lap down after a fueling issue. Pigot would finish 15th in his first race as a full-time Verizon IndyCar Series driver.

– Pigot turned 70 practice laps prior to qualifying and set the seventh-fastest lap of the third practice Saturday morning. Just as he was getting up to speed on his set of red Firestone Firehawk tires during the afternoon qualifying session, a red flag came out. The track went back green with one minute, 36 seconds left, giving Pigot time for only one lap. Though he did not have an optimum gap, he was still able to set his quickest lap of the weekend at 1:00.9668 (106.287 miles per hour). He missed advancing to the second round of qualifications by less than a one hundredth of a second and would start the 110-lap race from the 16th position.

– Pigot picked up two positions before the first full-course caution slowed the race on Lap 3. Pigot stayed out when the pits opened, picking up another spot to run 13th at the Lap 5 restart. The following lap, Graham Rahal dove to the inside of Pigot going into Turn 1 and made contact with Pigot. Pigot spun as a result of the contact and stalled, bringing out the second full course caution. Once re-fired, he brought the No. 21 Autogeek Chevrolet in for his first pit stop. After a quick inspection by the crew, it was determined there was no damage to the car and he re-entered the race on a set of sticker black tires.

– Pigot took the Lap 10 restart from the 22nd position as the last car on the lead lap. Pigot wasted no time at the back of the field and immediately began executing passes to make his way forward. In only 11 laps, he picked up 12 positions and found himself inside the Top 5 by Lap 22 as the leaders began to pit. On Lap 25, Pigot settled into the second position behind eventual race winner Sebastien Bourdais, who was on a similar pit strategy.

– During a caution on Lap 36, Pigot had to make an early stop as he had no grip left on his set of red tires. Pigot was 17th at the time of the restart two laps later; by the time he crossed the start/finish line on Lap 39, he was 10th. The phrase “cautions breed cautions” proved accurate as another yellow flag flew on Lap 40. By then, Pigot was 9th. Several cars stopped when the pits opened and Pigot moved up to 6th.

– On Lap 58, Pigot made his third pit stop from the 5th position. While he was able to get a fresh set of tires, fuel did not flow and another stop became mandatory. He had to stop again 11 laps later, dropping him back to 19th. Now on a completely different strategy from any cars around him, Pigot did what he could, climbing back up to 13th.

– One final stop would be required to get to the end of the race. Pigot stayed out as long as possible, hoping for a yellow to pack up the field. He made his final stop on Lap 95 and fell one lap down; the needed caution flew on Lap 102. As he was now a lapped car, he was re-positioned at the rear of the field for the conclusion of the race. Pigot picked up three positions in the final two green flag laps as other drivers made mistakes and finished in the 15th position.

– Pigot will remain in Florida to compete in next weekend’s Mobil 1 12 Hours of Sebring with Mazda Team Joest. From there, he will head to Barber Motorsports Park for a Verizon IndyCar Series test before several test days at the Indianapolis Motor Speedway. His next Indy car event will be the Phoenix Grand Prix on April 7, 2018.

SPENCER PIGOT, No. 21 Autogeek Chevrolet: “It was a pretty wild race out there. It was very tricky at the beginning going into Turn 1, trying to pass people on the paint. Early on, we were hit from behind and stalled. From there, we just had to try and battle back. We had a really good restart in the middle of the race and passed a lot of cars, then unfortunately we had another issue in the pits and couldn’t get any fuel into the car. We had to make a few unscheduled pit stops to make up for that and went a lap down, putting an end to our competitiveness. We had good pace and a good chance of finishing up towards the front. It was great to have the support of Autogeek this weekend and I appreciate the all of the hard work put in by my guys!”