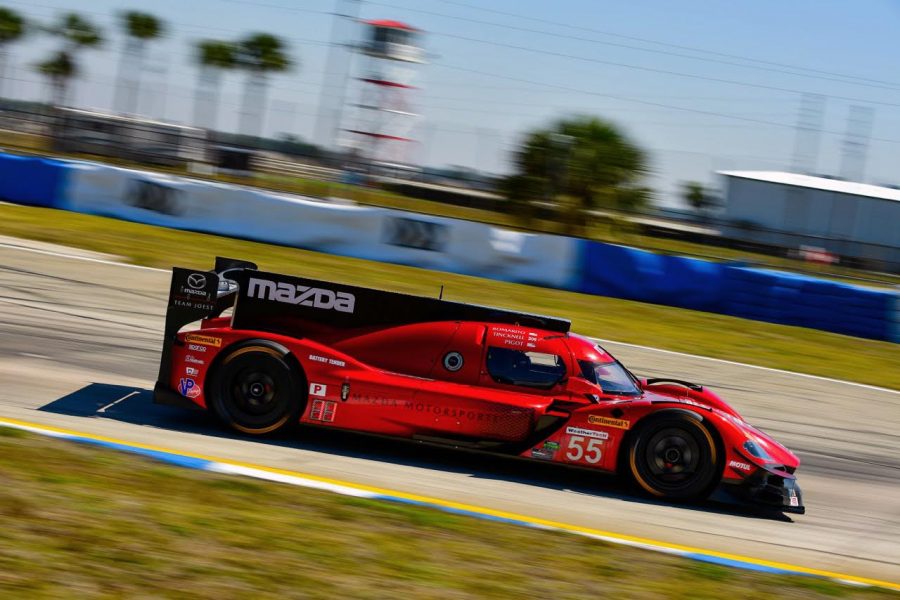 SEBRING, Fla. (March 18, 2018) – Until the final pit stop of the 66th Mobil 1 12 Hours of Sebring, the No. 55 Mazda RT24-P driven by Jonathan Bomarito, Spencer Pigot and Harry Tincknell was closing in on a potential victory at the famed circuit.

After leading the race for 58 laps and contending for victory throughout the day, the car would encounter an electric issue that prevented it from quickly starting at the final pit stop. Once it did start, the car finished the race in sixth position. The pair of Mazdas had shown winning potential earlier in the race when they ran first and second in the second hour of the race. After the No. 77 Castrol/ModSpace Mazda RT24-P was slowed in the fourth hour with a braking issue, the no. 55 Mazda RT24-P would contend for the victory throughout the rest of the race.

Olivier Jarvis set the fastest lap of the race and track record for IMSA’s Prototype class in the no. 77 Castrol/ModSpace Mazda RT24-P with a time of 1:49.002 around the 3.74-mile Sebring International Raceway circuit. The car, which he shared with Rene Rast and Tristan Nunez, finished the race in eighth position.

The next round of the IMSA WeatherTech SportsCar Championship will be the Bubba Burger Sports Car Grand Prix at the Toyota Grand Prix of Long Beach on April 13-14.

SPENCER PIGOT, NO. 55 MAZDA RT24-P: “We were excited about the prospects that we had throughout the race in the Mazda RT24-P. The crew guys were fast – in pit lane, we jumped spots every time we came in so that was great. We all led the race at different points throughout the twelve hours, so everything was looking good. Unfortunately we had an issue that showed up at the end, but I think we can all hold our heads up high and know that we can fight at the front.“

Like Loading...
Previous PostPigot to Compete in the No. 21 Preferred Free...
Next PostSpencer Pigot Shows Speed in Season-Opening F...