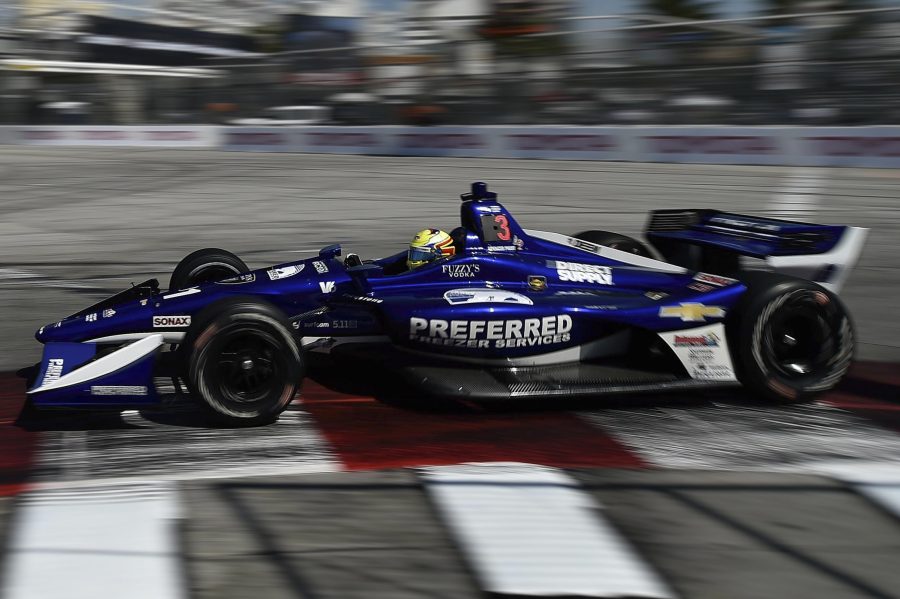 – Though he had the pace, Spencer Pigot did not achieve the results he hoped for in today’s Toyota Grand Prix of Long Beach. Pigot battled a gearbox issue through the midway point of the iconic race through the streets of Long Beach, limiting him to a 15th place finish.

– Leading into race day, Pigot was sidelined all but 10 laps of second practice while his crew swapped out the gear stack of his No. 21 Preferred Freezer Services Chevrolet. In Saturday’s third practice, Pigot turned his fastest lap of the weekend at 105.340 miles per hour (mph) was the seventh quickest overall.

– The IMSA WeatherTech SportsCar Championship raced immediately prior to qualifying, leaving slick and challenging track conditions for the Verizon IndyCar Series drivers. Qualification groups were decided by the lap times in the practice session immediately preceding qualifying, assigning Pigot to in Group 2. Pigot started on sticker black tires, pitting after two laps for a set of sticker red Firehawks. His fastest lap of 103.770 mph was not enough to advance him and the 24-year-old started 18th in his second Toyota Grand Prix of Long Beach.

– Throughout his first stint, Pigot concentrated heavily on saving fuel. Committed to a two-stop strategy, he gained positions as those on a three-stop strategy began to pit. Though instructed to save fuel, when he was given the green light to use extra fuel to make passes for position, he was able to complete them. As his first pit stop drew near, Pigot had gained eight positions to run 10th.

– Just prior to his first scheduled stop, Pigot radioed in that he was having issues with his gearbox, ranging from being unable to downshift to the car skipping gears. He fell from 10th to 15th in one lap. He made his first pit stop on Lap 29 for sticker red Firestone Firehawks, but the No. 21 Preferred Freezer Services Chevrolet crew determined there was nothing they could do to rectify the problem.

– While fighting the car, Pigot fell one lap behind the leaders and dropped all the way back to the 22nd position. By the next caution on Lap 42, the problem had resolved itself and Pigot was able to continue without further issue. He spent the remainder of the race keeping his nose clean, earning eight positions back by the end of the 85-lap race to finish 15th.

– Next up for the Verizon IndyCar Series is the 2.38-mile permanent road course of Barber Motorsports Park, the third race in a string of three back-to-back events. Pigot will return to the site where he swept the two Pro Mazda races in 2014 and the two Indy Lights races in 2015. The 2018 Honda Indy Grand Prix of Alabama will be broadcast live on NBC Sports Network on Sunday, April 22 at 3 p.m. ET.

SPENCER PIGOT, No. 21 Preferred Freezer Services Chevrolet, Finished 15th: “That was a disappointing race. Pretty much from the first stint, we were having gearbox issues. It got a lot worse at certain points of the race which ruined our day. We never really got a shot to fight for any positions or move up through the field. The Preferred Freezer Services guys worked hard this weekend and we made some good improvements over the three days, but we came away with not much to show for it. Disappointing, but hopefully we can turn it around at Barber.”

Like Loading...
Previous PostPigot Races Through the Rain At Barber Motors...
Next PostSpencer Pigot Takes Checkered Flag in 14th In...