Pigot Races Through the Rain At Barber Motorsports Park 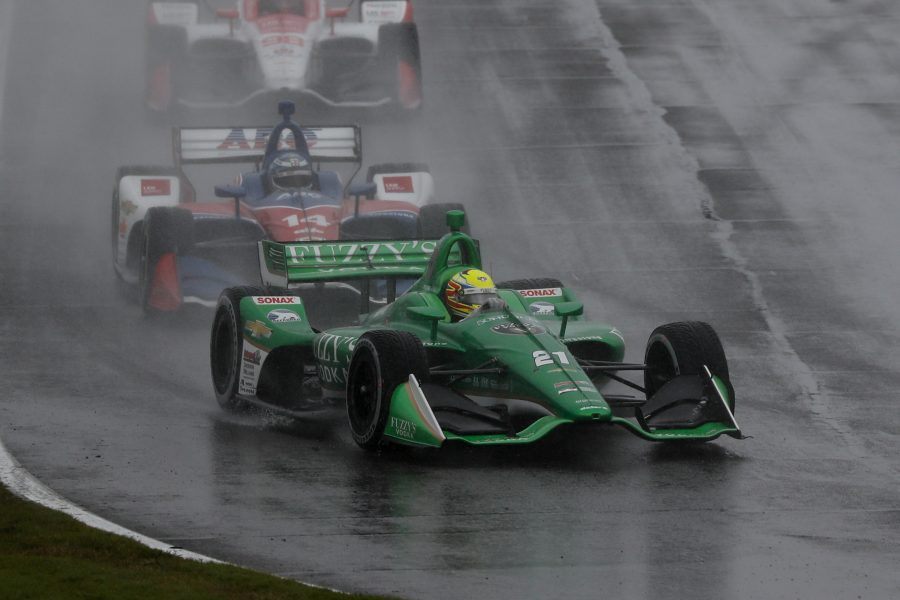 – The fourth round of Spencer Pigot’s Verizon IndyCar Series season became an event that spanned two days, beginning in rainy conditions on Sunday afternoon and finishing in the same vein a day later. Pigot raced towards the conclusion of the Honda Indy Grand Prix of Alabama hopeful for a dry finish, but luck was not on his side today. He finished the timed event in the 15th position after heavy rains plagued the 2.3-mile road course for the second day in a row.

– Pigot showed what he was capable of in the No. 21 Fuzzy’s Vodka Chevrolet yesterday during second practice. He was consistently near the top five while on black tires; when given a set of red tires at the end of the session, he set a lap that was the second-fastest of the session. He spent the majority of this morning’s Practice 3 on old tires, saving a set of stickers for the end. Just as he was getting up to speed on his new tires, the red flag came out and ended the session, which did not give him an opportunity to set a fast lap.

– Qualification groups are decided by the lap times in the practice session immediately preceding qualifying, assigning Pigot to Group 1. He started on a set of black Firestone Firehawk tires, making a stop after three laps for a set of sticker red tires. Pigot’s best lap of 121.553 miles per hour was the 9th fastest of the group. Since only the top six advance to Round 2, Pigot’s lap gave him the 17th starting position.

– As anticipated, rains arrived prior to Sunday’s pre-race ceremonies at Barber Motorsports Park. By the time the race started, heavy rain was falling and the race was declared a wet start, requiring all competitors to start on wet condition Firestone Firehawk tires. After one lap under caution, the green flag flew on Lap 2. Though Pigot lost two positions, he made them up immediately, before the conclusion of the next lap.

– When the stopped car of Charlie Kimball brought out the first yellow on Lap 12, Pigot was up to 15th. On the Lap 17 restart, Will Power spun and made contact with the wall. From there, driver visibility was too compromised and a red flag condition began. When officials decided to suspend the race until Monday, Pigot had gained five positions to run 12th.

– The race resumed just after the noon hour on Monday with 23 laps completed and approximately 75 minutes remaining. While Pigot was making his way around the lapped car of Zachary Claman De Melo on Lap 27, the two made contact and became entangled at speed. Both managed to continue, though Pigot dropped from 12th to 17th. The No. 21 Fuzzy’s Vodka crew readied spare suspension pieces in the event repairs were needed. However, when Pigot made his first stop on Lap 37, the crew looked over the car and deemed there was no damage. No longer needing to save fuel, Pigot was given the go-ahead to make maximum lap time and began working to regain the positions he had lost.

– With the field on split strategies, Pigot cycled toward the Top 10. The 24-year-old was running 11th, when he made his second stop on Lap 57. With the combination of his strategy and a dry race track, Pigot was looking at the potential of securing his first Top 10 finish of the season.

– However, heavy rains came to the 2.3-mile permanent road course for the second day in a row. Hoping for a late race caution that would have the event end under yellow, Pigot stayed on slicks as long as possible. With only five minutes left in the race, Pigot had to come in as well for wet condition tires after spinning on Lap 77 of 82 that would be completed. He would take the checkered flag in the 15th position.

SPENCER PIGOT, No. 21 Fuzzy’s Vodka Chevrolet, Finished 15th: “It was definitely a difficult race out there. We thought we were making up some ground by pitting early and running hard, which seemed to be working. We tried to gamble at the end to stay on slicks. We were hoping for a yellow that the race would end under and we could stay up where we were. Unfortunately, that didn’t happen and I just tried to keep it on the road the best I could. Eventually, it just got too wet and we had to come in at the end. There are some positives to take away from this weekend, we’re going to take those into the INDYCAR Grand Prix and hopefully be back up front!”