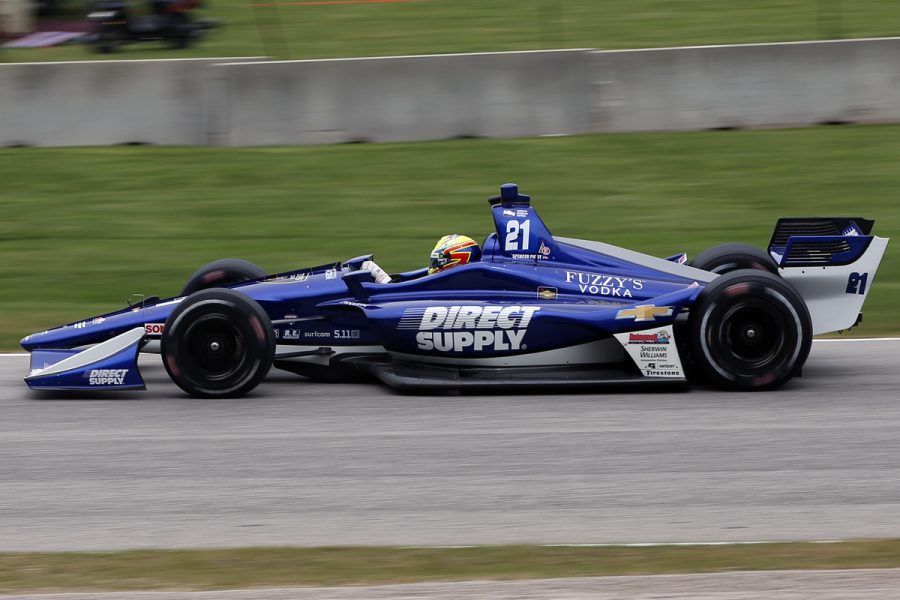 – Back at the site of his first Verizon IndyCar Series Top 10 finish, Spencer Pigot earned another today at Road America with an 8th place result. His finish was his best at Road America, his second Top 10 finish in four races and his highest result so far this season.

– Pigot managed 45 laps around the 4-mile road course during the three practice sessions preceding qualifying. The No. 21 Direct Supply crew worked throughout the combined two and a half hours of practice to dial in the set up of the car. Still, Pigot’s fastest lap at 138.802 mph had him only 18th on the weekend’s combined timing sheet.

– Qualification groups are decided by the lap times in the practice session immediately preceding qualifying, assigning Pigot to Group 2. When the green flag waved for Pigot’s group, he started on a set of new sticker black Firestone Firehawk tires and stopped after two laps for sticker reds. On his first lap at speed on the red tires, Pigot shot to the top of the scoring sheets at 139.732 mph. As other cars turned their final laps, Pigot sat 5th. He fell one position after the checkered flag to 6th; however, that was still enough to advance him to Round 2 of qualifications for the second time in his career.

– For Round 2, Pigot began on a set of scuffed black Firehawks and made a pit stop after two laps for another set of sticker red tires. For the first time during the weekend, Pigot broke the 140 mile-per-hour mark, setting a quick lap of 140.024 mph. He finished the 12-minute season in the 10th position, a mere one-tenth of a second off of moving up to the Firestone Fast 6.

– At the green flag for the KOHLER Grand Prix, Will Power, who was starting second, appeared to lose all power. Cars stacked up trying to avoid him, including Pigot who lost five positions and fell to 15th. By Lap 3, Pigot had already made up all the spots he had lost and though he was tasked with saving fuel, he was still able to complete a pass on Marco Andretti to move into the 9th position. As Sebastien Bourdais pulled until the pit lane with an issue, Pigot moved up another position.

– The 24-year-old made his first pit stop on Lap 13, choosing to complete his second stint on a set of sticker black Firehawks. He came in while running 8th and elected for no other changes, cycling into the 10th position after the entire field had made their first stops. Pigot set his fastest lap of the race on Lap 17, moving back around Andretti into the 9th position. As Tony Kanaan stopped on Lap 18, Pigot regained the 8th position and stayed there for the remainder of the stint.

– Pigot chose scuffed reds for the third and fourth stints of the race, pitting on Laps 27 and 41. Quick work on his final stop by the Direct Supply crew vaulted Pigot up to 7th. Coming to the checkered flag on the final lap, Simon Pagenaud took advantage of his sticker red tires to get past Pigot for the 7th position.

– While the Verizon IndyCar Series is off next weekend, Pigot will travel to Watkins Glen to race in Sahlen’s Six Hours of the Glen. He will compete in the six-hour race on Sunday, July 1st in his role as an endurance driver for Mazda Team Joest. He will be back in the No. 21 Fuzzy’s Vodka Chevrolet at the Iowa Corn 300 on Sunday, July 8th, his first Indy car race at Iowa Speedway.