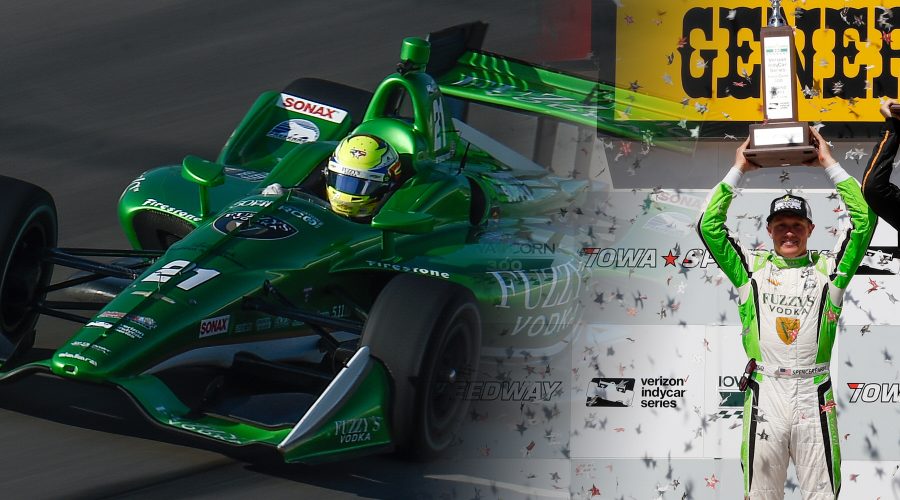 – It may have been his first Indy car race at Iowa Speedway, but Spencer Pigot looked every bit of a veteran at the .875-mile oval as he earned his first Verizon IndyCar Series podium finish today. Pigot started 18th in today’s Iowa Corn 300 and raced all the way up to the 2nd position, also his career-best Indy car finish.

– Last week, Pigot completed a one-day test at Iowa Speedway alongside teammate and team owner Ed Carpenter. It was Pigot’s first time around the short oval in an Indy car, though he had competed at the track in 2015 during his successful campaign for the Indy Lights championship.

– Pigot’s qualification simulation in Saturday’s opening practice session gave him the sixth-fastest lap at 181.083 miles per hour. However, drivers faced much higher track and air temperatures in the afternoon during qualifying. Pigot struggled with a lack of grip throughout his qualifying run and would only start 18th. The final practice session presented an entirely different set of challenges with Pigot turning 70 laps while searching for the ideal setup.

– It was a different story when the green flag dropped for today’s Iowa Corn 300. Pigot’s charge to the front began immediately when he gained three positions during the first of the 300 laps, improving from 18th to 15th in just seven-eighths of a mile. Pigot continued to move forward, methodically picking off his competitors and working his way up to 11th. With the field turning laps around 18 seconds, race leader Josef Newgarden caught up to Pigot on Lap 49 and put him one lap down to the field.

– With a car as quick as Newgarden’s, Pigot slotted in behind and stayed with Newgarden as he continued to work through traffic. Pigot worked his way up to 7th before making his first pit stop on Lap 73. After all cars had cycled through, not only had his Fuzzy’s Vodka crew gained him two positions, Pigot also found himself back on the lead lap.

– One-third of the way through the race, Pigot passed Ryan Hunter-Reay for the 4th position. Pigot did not stop there, overtaking Simon Pagenaud on 113th lap to move into 3rd. The first yellow flag of the race flew on Lap 139 after Zach Veach brushed the wall. At the time of the caution, Pigot was one of only four cars who remained on the lead lap.

– Pigot used the caution as a welcome opportunity to make his second pit stop. Lead lap cars were able to stop when the pits opened on Lap 142. Just like his first stop, Pigot requested no changes to the No. 21 Fuzzy’s Vodka Chevrolet.

– The race went back green on Lap 149, presenting Pigot with the perfect opportunity to pass James Hinchcliffe for the second position. Hinchcliffe took the spot back four laps later and the two chased Newgarden through lapped traffic. That traffic worked against Pigot on Lap 171 as Takuma Sato was able to get by, dropping Pigot to 4th.

– On Lap 250, Hinchcliffe again passed Pigot, dropping him to 3rd. Six laps later, the eventual race winner Hinchcliffe took the lead of the race from Newgarden. While Pigot tried to catch up to Newgarden, then running second, he again caught lapped traffic. This time, Robert Wickens was able to slip by on Lap 279 and Pigot fell to 4th.

– With six laps to go, a piece of debris in the racing line necessitated a yellow. The drivers running second (Newgarden) and third (Wickens) made a pit stop for new tires on Lap 297, gambling that the race would conclude under green-flag conditions. As luck would have it for the No. 21 team, it did not. Pigot moved into the second position and as yellow and checkered flew, he earned his first career Verizon IndyCar Series podium.

– Pigot has successfully continued Ed Carpenter Racing’s streak of podium finishes at Iowa Speedway. ECR drivers have stood on the first or second step of the podium after the Iowa Corn 300 each of the past four years. Additionally, ECR has had at least one driver inside the Top 5 for five consecutive years. With teammate and team owner Ed Carpenter’s 10th place today, now nine of ECR’s 11 starts at Iowa Speedway have concluded in a Top 10 finish.

– Next week, Ed Carpenter Racing will head north to Toronto for the only international stop on the Verizon IndyCar Series schedule. The Honda Indy Toronto is the 12th of 17 races during the 2018 season and will be the final street circuit race of the year. Pigot’s No. 21 will revert back to the blue and white Preferred Freezer Services livery last seen at the Indianapolis 500. The Honda Indy Toronto will be broadcast live on NBC Sports Network beginning at 3 p.m. ET on Sunday, July 15.

SPENCER PIGOT (No. 21 Ed Carpenter Racing Fuzzy’s Vodka Chevrolet): “What a race! Right from the get-go, we had a good car based on how we were getting through traffic. As the stint went on, we just got stronger and stronger. To find our way up near the front there was a little unexpected to start the day, but I’m very excited and very proud of everyone here at the team. but I’m really proud of everyone at Ed Carpenter Racing and Chevrolet. The Fuzzy’s Vodka car was great! We didn’t have a good day yesterday, but everyone kept their heads down and kept pushing and we’re on the podium! It feels great. My first podium in INDYCAR and hopefully, the first of many! What a tough race. It was really physical out there. It was hot and a lot of hard racing, so many close moments, but so much fun racing here in Iowa!”

Like Loading...
Previous PostTough End to Promising Toronto Weekend for Pi...
Next PostPigot Earns Another Top 10 in Road America