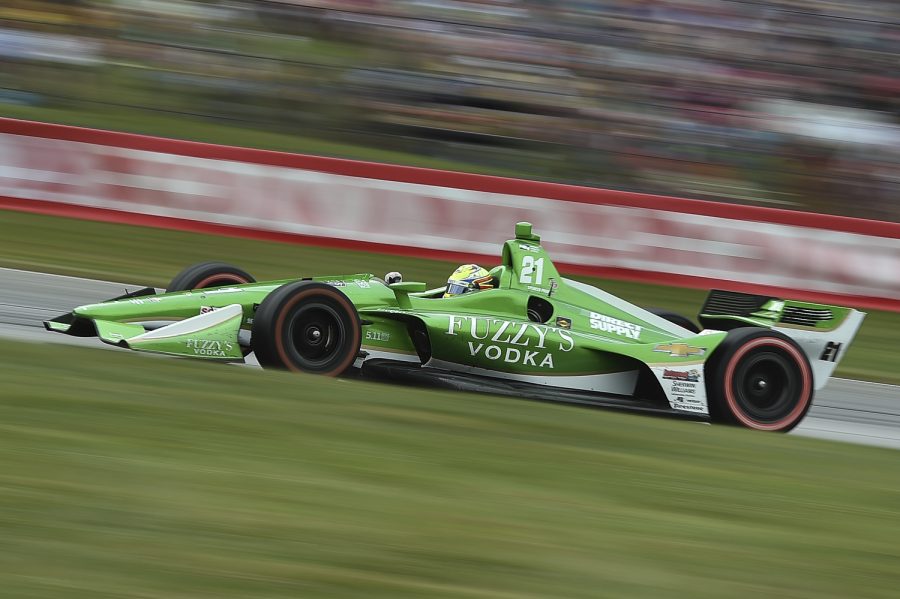 – In a stark contrast from the practice and qualifying sessions leading up to today’s race at Mid-Ohio Sports Car Course, not a single car ventured off the circuit and the race remained caution-free for the duration. It was up to Spencer Pigot to race his way through the field over the course of today’s 90 green-flag laps and he delivered. Pigot would be one of the biggest movers during the race, gaining five positions from the start to finish 13th.

– The weekend had been off to solid start for Pigot, who had lap times in the Top 5 in the first two practice sessions on Friday. Pigot was assigned to Group 2 of qualifying yesterday, but a red flag shortened the available time he had to turn a fast lap on Firestone’s red Firehawk tires to less than four minutes. Pigot struggled to maintain a gap, having to lift on two fast laps as he approached another competitor. King would start 18th today.

– Pigot was boxed in on the start and with no space around him, he dropped one position to 19th. He has just passed Charlie Kimball for 18th when Takuma Sato hit the side of the No. 21. There was no damage to Pigot’s car, but he would lose the position he just gained. Pigot remained focused, getting past both Kimball and Sato in the following two laps to move into 17th. The 16th position became his when Ed Jones made an early pit stop.

– Though up three positions from the start, Pigot was battling with understeer. He made his first pit stop on Lap 12 for a front wing adjustment and a set of sticker black Firehawks. Pigot would rejoin the race in the 20th position, but struggled with grip throughout his second stint. Pigot made his second stop on Lap 38, switching back to red tires.

– After his stop, Pigot was again back to 20th. On red tires, he was able to surge forward. Over the next 20 laps, he gained seven positions, racing his way up to 13th. Though he had been a lap down, he was the first car behind race leader and eventual winner Alexander Rossi. Pigot regained a lead-lap standing as Rossi stopped on Lap 59.

– Pigot would make his final stop on Lap 64. Pigot took scuffed reds, coming out 14th behind Jones, who still needed to make his final pit stop. Once Jones stopped on Lap 78, Pigot moved into 13th. The Fuzzy’s Vodka driver continued to close the gap to the cars in front of him all the way to the checkered flag, but retained his positions. Pigot would finish 13th.

– Four races remain in the 2018 Verizon IndyCar Series season. Pigot’s next race will be his first at Pocono Raceway, a 2.5-mile triangular oval he has not yet raced on. The ABC Supply 500 will take place on Sunday, August 19, 2018.

SPENCER PIGOT, No. 21 Fuzzy’s Vodka Chevrolet, Finished 13th: “It was a bit of a tough start of the race. We didn’t get a great start and got kind of boxed in. We weren’t able to move up early on like we had hoped for. We struggled with the black tires, but once we put the reds on again, the car was pretty good. We were able to make passes and fight our way up to 13th. The second half of the race wasn’t too bad, but we would have liked to have a different first half. We’ve had a very solid last five or six weekends and a lot of positives to take away. We will work to put it to good use for the last races!”

Like Loading...
Previous PostPigot Finishes 16th at Pocono Raceway Despite...
Next PostTough End to Promising Toronto Weekend for Pi...