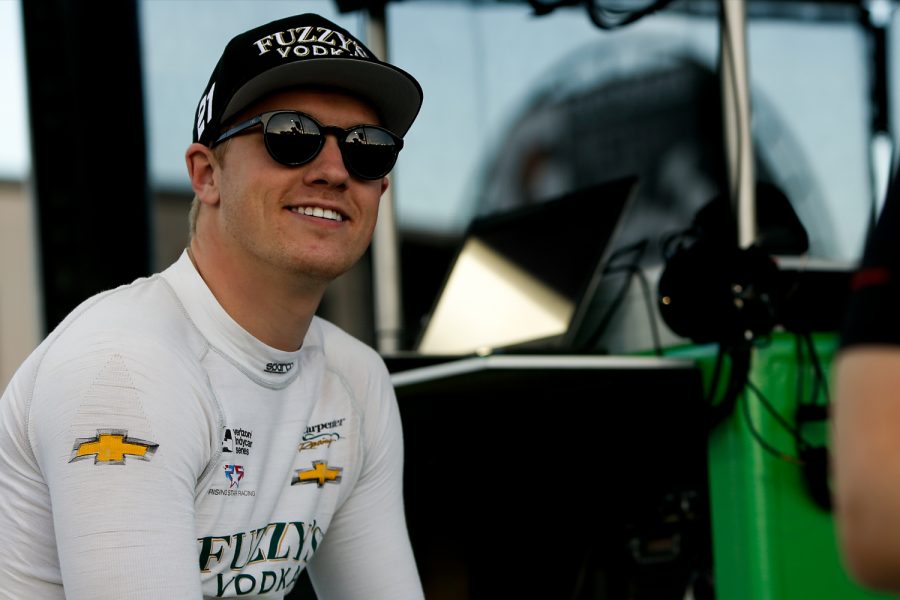 (SONOMA, Calif.) September 13, 2018 – Spencer Pigot will remain behind the wheel of the No. 21 Chevrolet for the 2019 Verizon IndyCar Series season, Ed Carpenter Racing announced today. Pigot’s return to the No. 21 will mark his fourth year with the team and fourth season as a Verizon IndyCar Series driver. His first full-time campaign has included career-best qualifying and finishing positions on street courses, road courses and ovals, including his first podium result. Pigot will continue as the driver of the No. 21 for a second year and compete in all 17 events on the 2019 calendar.

“I’m extremely happy to be returning to Ed Carpenter Racing for the 2019 season! I have to thank Ed Carpenter, Stuart Reed and Tony George for giving me the opportunity to race for their team once again. I’m honored to represent our great partners of Fuzzy’s Vodka, Preferred Freezer Services, Direct Supply, Autogeek and everyone else that makes this possible,” stated Pigot. “It’s been great to compete in my first full season of Indy car racing this year and I look forward to building on that next year. We have a lot to look back on and learn from; we will be working hard over the offseason and will be able to hit the ground running when we get to next season’s opener in St. Pete!”

Pigot’s first full-time Verizon IndyCar Series season has been full of milestones. At the Indianapolis Motor Speedway road course, Pigot advanced in qualifying for the first time and turned in his best road course qualifying effort. Though the 24-year-old had competed in two previous Indianapolis 500s, the 2018 edition was his first with Ed Carpenter Racing. He made the prestigious Fast Nine Shootout for the pole position and would line up 6th, his best starting position to date. Three of Pigot’s last six races have resulted in the three strongest results of his career. His first Indy car podium came with a 2nd place at Iowa Speedway, the fourth consecutive year ECR has had a driver finish first or second at the short oval. A 6th place finish came at Gateway Motorsports Park, followed by Pigot’s best career road course finish one week later with a 4th place at Portland International Raceway. Each race featured Pigot battling his way through the field, continuing a trend he has become well-known for.

ECR team owner Ed Carpenter recognized Pigot’s talent immediately and is pleased with the progress Pigot has continually shown. “I am really happy to have Spencer back in the No. 21 for the 2019 season. We have always believed that Spencer has the potential to compete for race wins and championships and he has really showed that in the back half of this season,” commented Carpenter. “Hopefully we can break through this weekend at the season finale and get ECR back in the win column!”

The 2019 season will be Pigot’s fourth with Ed Carpenter Racing and second as the team’s full-time driver. His journey through the Road to Indy ranks saw the Orlando, Fla.-native become the winningest driver in the program’s history with four championships and 24 race wins. By virtue of claiming the 2015 Indy Lights championship, Pigot completed a three-race Indy car scholarship program in early 2016. He then joined ECR as road and street course driver of the No. 20 Chevrolet, retaining the role through the 2017 season. In 2018, he was subsequently elevated to the No. 21, the team’s full-time entry. All but four of Pigot’s 38 Verizon IndyCar Series starts have been with ECR. He continues to sharpen his skills by serving as an endurance driver for Mazda in the IMSA Weathertech SportsCar Championship.

Pigot credits much of his successful transition into full-time Indy car racing to his teammate and team owner. While Carpenter split the No. 20 with Pigot in his first two seasons, 2018 was the first year the two raced alongside each other. “I’ve been able to learn so much from Ed, by him sharing his knowledge with me and just being on track with him. Even though there were several ovals I hadn’t raced an Indy car on prior to this year, Ed helped me feel like I was a stronger driver each time out,” said Pigot. Carpenter will continue to drive the No. 20 Fuzzy’s Vodka Chevrolet on ovals in 2019 for what will be his 17th year of Indy car competition. The road and street course driver for the No. 20 will be announced at a later date.

Formed in late 2011, ECR entered the Verizon IndyCar Series full-time in 2012. The team has proven its versatility by collecting seven wins on each type of track the series competes on – street and road courses, short ovals and speedways. ECR Chevrolets have started on the front row of the Indianapolis 500 five of the past six years, including Carpenter’s three pole positions. When he earned the coveted first starting spot for the 2018 Indy 500, the only owner/driver in the Verizon IndyCar Series became just the 10th driver in the 102-year history of the race to earn three or more pole positions. The Indianapolis-based team has 25 Top 5 finishes to date, 19 of which have been podiums.

The 2018 Verizon IndyCar Series season will conclude this weekend with 85 laps around the natural terrain road course of Sonoma Raceway. The Grand Prix of Sonoma will take place on Sunday, September 16.