Top 10 Finish for Pigot in First Race of Detroit Doubleheader 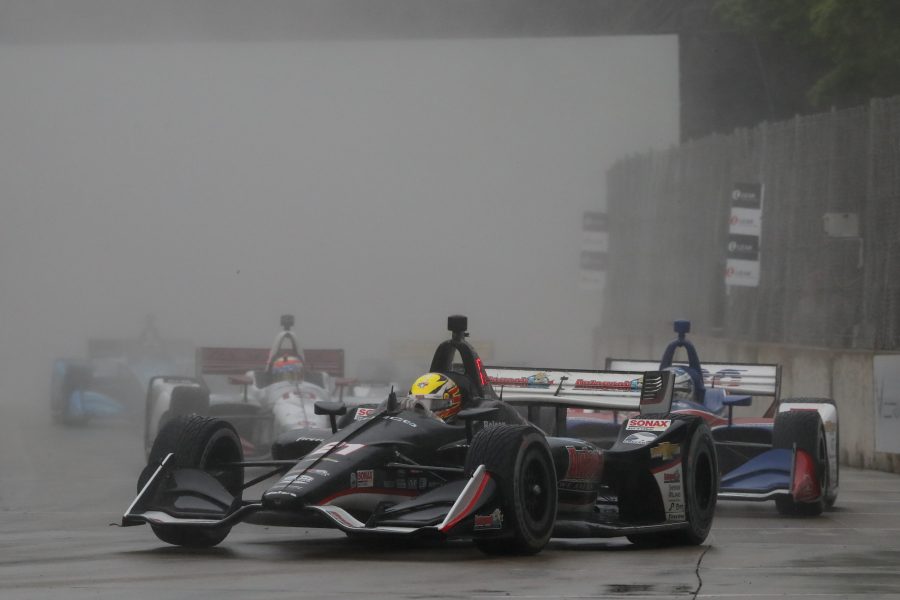 – With a weather delay and a rainy start, Race 1 of the Chevrolet Detroit Grand Prix concluded this evening. For the third time in three years, Spencer Pigot earned a Top 10 finish in Race 1 of the only doubleheader weekend on the NTT IndyCar Series schedule. He will compete in Race 2 tomorrow afternoon.

– Unlike knockout qualifying at other street courses, qualifying for the Duals in Detroit would see the field split in half with both groups getting a 12-minute session. The fastest driver overall would be awarded the pole position, while the rest of the drivers from that group would fill out the odd-number spots. Pigot was out to qualify in Group 2, finishing in the 9th spot. With pole winner Alexander Rossi coming from Group 2, Pigot would be assigned the 17th starting position.

– Following the delay due to heavy storms passing over Belle Isle, the race switched from the scheduled 70 laps to a timed race of 75 minutes. The race was also declared a wet start, meaning all competitors started on Firestone’s wet compound Firehawks. The race clock started under a yellow flag after a car spun coming to the green.

– With the racing line rapidly drying, Pigot was one of the first cars to duck into pit lane for a switch to slicks on Lap 16. Just after Pigot left the pit lane, his teammate Ed Jones made contact with the tire barrier in Turn 7 and brought out a full-course caution. T

– When the cars were re-ordered following everyone’s pit stops, Pigot found his No. 21 Autogeek Chevrolet up seven positions to 10th. He would gain another position as Scott Dixon made contact with the tires and was not able to finish. Another competitor was able to take the spot back from Pigot, but Pigot then held off late-race charges on multiple restarts to earn his third Top 10 finish at Detroit.

– Tomorrow will follow the same format as today with qualifying for Race 2 kicking off the day at 10:45 a.m. ET. NBC will broadcast the 70-lap race live, beginning at 3 p.m. ET. The green flag for Race 2 of the Chevrolet Detroit Grand Prix is scheduled to fly at 3:50 p.m. ET.

SPENCER PIGOT, No. 21 Autogeek Chevrolet, Finished 10th: “It was a tough race out there with all of the different conditions! We were able to move forward a decent amount of positions which was good, though we would have liked to have finished a little higher up. It could have been a lot worse! Thank you to my guys, we made a good call when to come in for slicks. We’ll go back tonight and see where we can improve for tomorrow.”

Like Loading...
Previous PostSecond Detroit Race Sees Pigot Taken Out of C...
Next PostPigot Stays the Course Over 500 Miles to Fini...