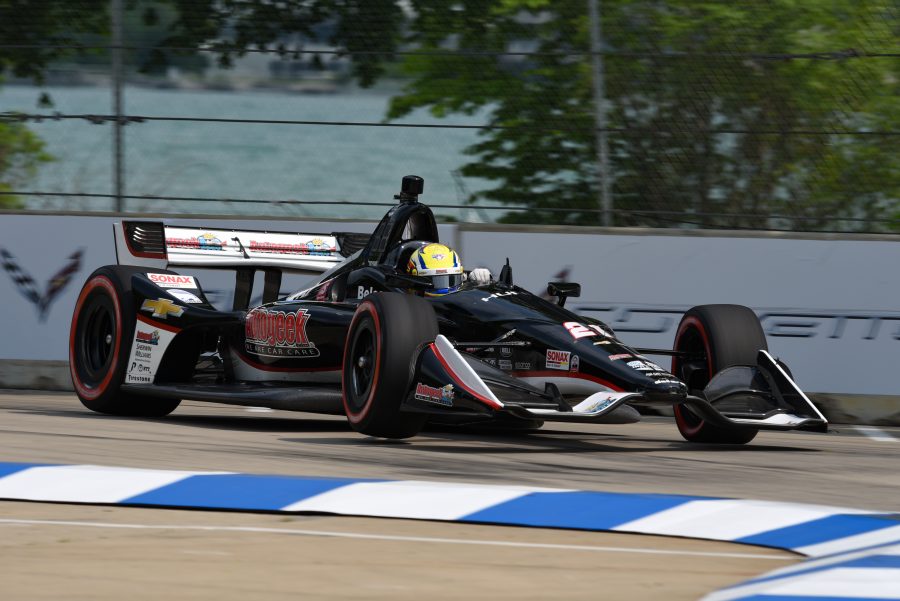 – For the third time in eight days and second time in 24 hours, it was race day for Spencer Pigot. After a timed race yesterday which lasted 75 minutes, he climbed back into his Chevrolet-powered Indy cars today for Race 2 of the Chevrolet Detroit Grand Prix doubleheader. After yesterday’s Top 10 finish, today’s race came to an early end for Pigot. Just prior to his first pit stop, another car struck him from behind as he was trying to enter the pit lane and sent him into the wall.

– This morning’s qualifying for Race 2 followed the format of Race 1, with the field being split into two groups which each received a 12-minute session. The only difference was Group 2 would be the first to go out today, including Pigot. Pigot had the 5th fastest lap of the Group 2 qualifiers. With the pole winner Josef Newgarden coming from Group 1, Pigot received the even-numbered starting position of 10th.

– At the green flag for Race 2, there was a multi-car accident just three turns into Lap 1. Pigot rolled the dice and did not pit under the first caution. He vaulted from 10th to 2nd; he and eventual race winner Scott Dixon were on red tires. Pigot stayed in 2nd until his tires began to fall off and was set up to pit for blacks on Lap 15. He moved to the inside of the track to signal he was going come in for a pit stop, but before he could make it to the pit lane, he was hit from behind by Sebastien Bourdais. The contact sent Bourdais into the air and Pigot into the concrete wall. The No. 21 Autogeek Chevrolet sustained heavy damage to the right front and was unable to continue. Pigot would be credited with a 21st place finish.

– The Ed Carpenter Racing team will return to their Indianapolis race shop tomorrow morning to prepare Pigot’s No. 21 for next weekend’s high-speed oval race at Texas Motor Speedway. The DXC Technology 600 will be shown live on NBC Sports Network, beginning at 8 p.m. ET on Saturday, June 8, 2019.

SPENCER PIGOT, No. 21 Autogeek Chevrolet, Finished 21st: “We went off strategy, but the car was going to be pretty good. Obviously, (Scott) Dixon and I were both struggling a lot on those tires, getting passed left and right. It was very easy for all other drivers to see and it wasn’t going to take much to get by us. Coming out of (Turn) 13, as soon as I could, I got over to the right to signal I was coming into the pit lane. There’s obviously public radio as well that (said) we’re pitting; everyone can hear that. I just felt a massive hit from behind. It caused a lot of damage and obviously with the tires in that state you have to brake a little early coming to pit lane. I don’t know if that’s what caught (Sebastien Bourdais) off or what, but it’s definitely unfortunate.”

Like Loading...
Previous PostPigot Finishes 14th in a 248-Lap Battle of Pe...
Next PostTop 10 Finish for Pigot in First Race of Detr...