Pigot Fights Through To The Checkered Flag at Road America 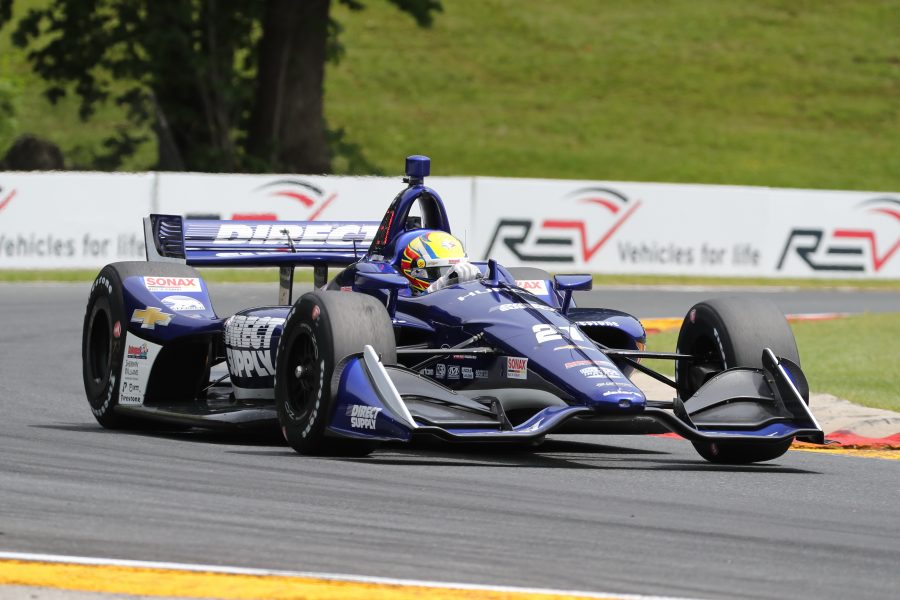 – Today’s REV Group Grand Prix results did not come easy for Ed Carpenter Racing’s Spencer Pigot. After struggling with grip on the red tires on his first stint, he found himself largely alone on the 4-mile Road America circuit and unable to make up positions. He brought home a 14th place finish at the end of the 55-lap race.

– Pigot set his fastest lap of the weekend on Saturday morning in Practice 3. His top speed of 139.731 miles per hour (mph) was the 6th fastest of the session and 6th of all practice laps. With the times from Practice 3 determining qualifying groups, Pigot was assigned to go out first in Group 1 of Round 1. Because of the length of Road America, sessions were extended to 12 minutes from the standard 10. A run on red tires would see him turn a lap of 139.977 mph, putting him 3rd on the charts and earning him a spot in Round 2. Pigot’s best lap of 139.876 mph in Round 2 gave him the 8th position. With yesterday’s effort, Pigot advanced to the second round of qualifying in three of the four road course events so far this season.

– When the green flag dropped on today’s 55-lap race, Pigot slid back one position to 9th. As Pigot began to struggle with grip on his opening set of red Firestone Firehawks, he slipped down the order to 14th. He came into the pit lane for the first time on Lap 13. He took a front wing adjustment and a set of scuffed black tires. The field was shuffled after their stops as different strategies began to play out and Pigot eventually slotted into 13th.

– Pigot came in for his second pit stop on Lap 27, selecting sticker blacks for the following stint. The only other car running near Pigot’s No. 21 Direct Supply Chevrolet was Marcus Ericsson, who Pigot quickly passed and built a sizable gap over. Pigot stayed in 13th until his final pit stop for scuffed reds on Lap 42.

– After his last stop, Pigot once again found himself alone on track. In the closing laps, he made up nearly 10 seconds on the car in front of him. However, Ericsson, on black tires, also closed the gap and took the position back from Pigot. Pigot would finish 14th in his fourth race at Road America.

– Next up for the NTT IndyCar Series is the street race in Toronto, Ontario, Canada. It will be the only international stop of the 2019 season. The three-day event will begin on Friday, July 14. The Honda Indy Toronto will be broadcast live on NBC Sports Network at 3 p.m. ET on Sunday, July 16.

SPENCER PIGOT, No. 21 Direct Supply Chevrolet, Finished 14th: “Going in, we thought red tires were going to be the way to go. We elected to start on use reds, thinking we would do just one stint on blacks. As it turned out, the reds had a lot of degradation and it was really hard to keep them underneath us. Doing two stints on reds hurt us. The car was really good on blacks and we were pretty fast. Unfortunately, we just made the wrong decision on tries and that’s all it takes to have a bad race. We’ll take the positives from this weekend and move on to Toronto.”