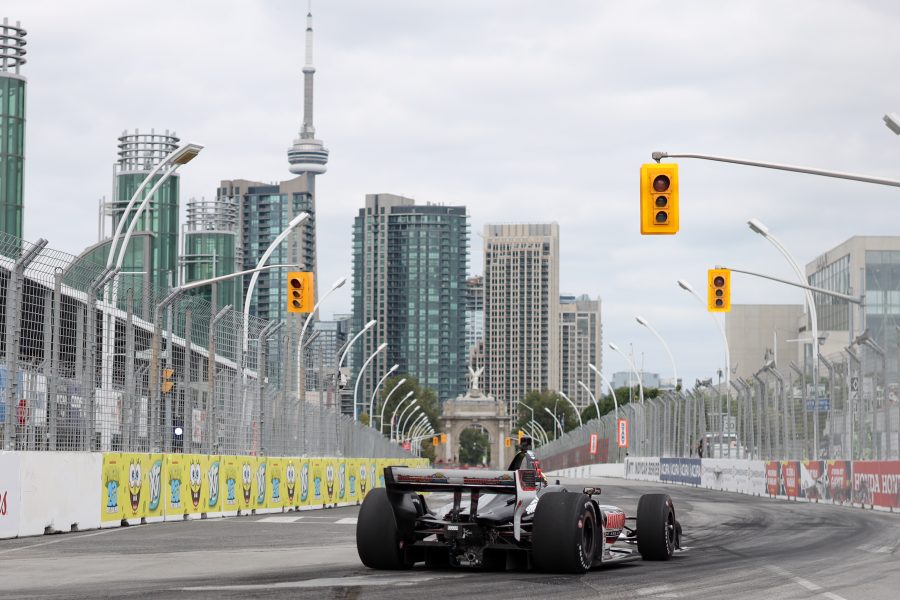 – A strong qualifying effort by Ed Carpenter Racing’s Spencer Pigot did not translate over to the desired result in today’s Honda Indy Toronto. Though Pigot had his best starting position at the 1.786-mile street circuit, he had to save fuel in an attempt to complete the race in only two pit stops without the aid of multiple yellow flags. Eventually, Pigot would have to make a third stop and would take the checkered flag in 15th.

– Pigot found himself in the Top 10 of every session this weekend, including three practices, qualifying and this morning’s warm-up. For the fourth time this season, Pigot advanced to the second round of qualifying. Pigot went quicker still in Round 2, turning in his first lap over the 109-mph mark at 109.306. It would ultimately give him the 9th starting position on today’s grid, his highest starting position on a street course to date.

– In Turn 8 of the first lap, Pigot successfully navigated through a multi-car incident but fell to 11th. The restart came on Lap 4 and by Lap 13, Pigot’s opening set of red Firestone Firehawks had gone off to the point where a pit stop was necessary. He was the first car to come in to the pit lane under green flag conditions, switching to the black compound tires. Once the field had completed their first stops, Pigot was 13th.

– On Lap 19, Pigot and his teammate Ed Jones made contact while exiting Turn 3. Pigot’s front wing was damaged in the incident and he fell two positions. The No. 21 Autogeek Chevrolet crew reacted quickly, readying a spare wing. However, Pigot made the call that the car was still drivable and elected to remain on track instead of making an additional pit stop.

– Pigot then went into fuel save mode, aiming to finish the race on only one more pit stop. Pigot stretched his tank of fuel to Lap 47 before he made his second stop from the 9th position. When he prepared to launch, the air hose of a wheel gun tangled on the broken front wing. Again, the crew quickly jumped into action to keep Pigot from getting a penalty. The No. 21 stalled, but the hose was removed and the car was re-fired.

– After the stop, Pigot was 12th but became apparent that he would need to come in for a splash of fuel to finish the race. He slid into the Turn 3 runoff on Lap 72 but immediately continued. It was determined that was the best time to bring him in for his third stop and he also received a set of scuffed black Firehawks. He was not the only car to have to make an additional stop. As other cars dove into the pit lane in the closing laps, Pigot would pick up additional positions and moved back up to 15th by the checkered flag.

– Ed Carpenter Racing will have a quick turnaround to get ready for next weekend’s race at Iowa Speedway. The Iowa 300 will be broadcast live on NBC Sports on Saturday, July 20 beginning at 6:10 p.m. local (7:10 p.m. ET).

SPENCER PIGOT, No. 21 Autogeek Chevrolet, Finished 15th: “Obviously, this was a frustrating race. We had a really well-handling car this weekend. We may have had some issues with re-fueling and may not have been getting all of the fuel in. That put us on the back foot and caused us to have to make a third pit stop. We had to drive most of the race with the front wing damage as well. Overall, this was not a result that shows the potential of the Autogeek Chevy and our team this weekend. We had a good race in Iowa last year, so we are hoping to turn it around next weekend.”

Like Loading...
Previous PostPigot Extends ECR's Streak of Top 5 Finishes ...
Next PostPigot Fights Through To The Checkered Flag at...