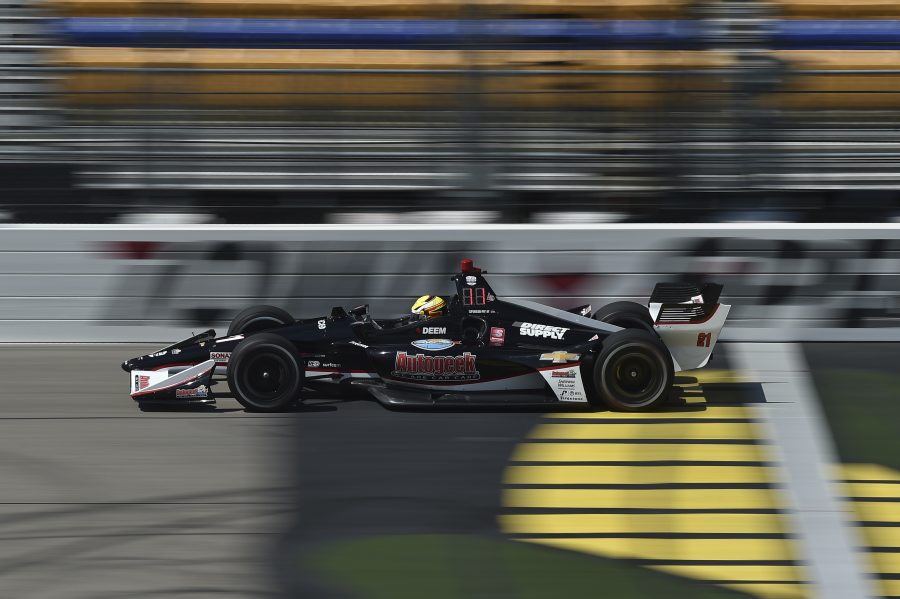 – For the seventh time in the past seven years, an Ed Carpenter Racing Chevrolet finished inside the Top 5 at Iowa Speedway. Spencer Pigot followed up last year’s podium run with a 5th place in the 2019 edition of the 300-lap race.

– Though his qualifying effort was not what was desired, Pigot worked hard on his race set up during yesterday evening’s final practice to become comfortable with his car over the long run. Pigot, who qualified 19th, was 11th quick in the 60-minute session.

– After a rain delay stretched over four and a half hours, Pigot got to work immediately when the green flag finally dropped. The first yellow flag flew on Lap 16 as a car spun in Turn 4. Pigot used the opportunity to dive into the pit lane for a fresh set of tires on Lap 19. His No. 21 Autogeek Chevrolet crew gained him a position on the stop as he exited the pits in 16th.

– The race went back green on Lap 24. Pigot put his new Firestone Firehawks to work, immediately passing Graham Rahal on the restart. Pigot continued to carve his way forward and found himself in 10th, directly behind his team owner Ed Carpenter.

– A yellow flag flew for more rain on Lap 51, followed by a red flag on Lap 55. After nearly 28 minutes, the race resumed. Pigot came in for tires and fuel as soon as the pit lane was opened and he rejoined the race in 9th. He remained in that position until Lap 113 when he picked off two cars for 7th.

– The next round of pit stops began with Pigot coming in on Lap 137. Again, his crew gained him positions and he would run 5th after the field had cycled through. By Lap 178, Pigot was running 3rd.

– A caution flag appeared three laps later as two cars made contact in Turn 4. As one of only six cars remaining on the lead lap, Pigot came in for a stop when the pits opened for lead lap cars on Lap 191. Pigot remained 3rd, but would fall a position after the Lap 199 restart as Pagenaud got by.

– Another round of green flag pit stops began and Pigot made his on Lap 248. An improper pit entry penalty for Will Power bumped Pigot up to 5th. On Lap 264, the next caution came out for Carpenter spinning at the exit of Turn 2. The only car ahead of Pigot that stopped under the caution was Scott Dixon, moving Pigot up to 4th.

– The final restart came on Lap 274, but with fresh tires, Dixon was able to take the position back from Pigot in just two laps. For the remaining 24 laps of the race, Pigot held off a charge from Alexander Rossi to maintain the 5th position. With Pigot’s result, 10 of ECR’s 13 starts at Iowa Speedway have concluded in Top 10 finishes. Additionally, his finish at Iowa Speedway matches his best of the year as he also finished 5th at the Indianapolis Motor Speedway road course in early May.

– The Ed Carpenter Racing team will face another tight turnaround to prepare the No. 20 and 21 for next weekend’s race at Mid-Ohio Sports Car Course. Not only will it be the third race in three weeks for the NTT IndyCar Series, it will take place on the third different type of venue.

SPENCER PIGOT, No. 21 Autogeek Chevrolet, Finished 5th: “It was a tough race, as always! With it cooling down, it was tougher to make passes as everyone had a little bit more grip. It just speaks to how well the car was handling tonight. The No. 21 Autogeek Chevrolet was really good, I can’t thank the guys enough from rebounding from qualifying! At times, we were really strong. That last restart, I couldn’t get up to speed as quick as some of the guys. We’ll have to see where we can improve there, but overall a good recovery. I am very happy to get back into the Top 5!”