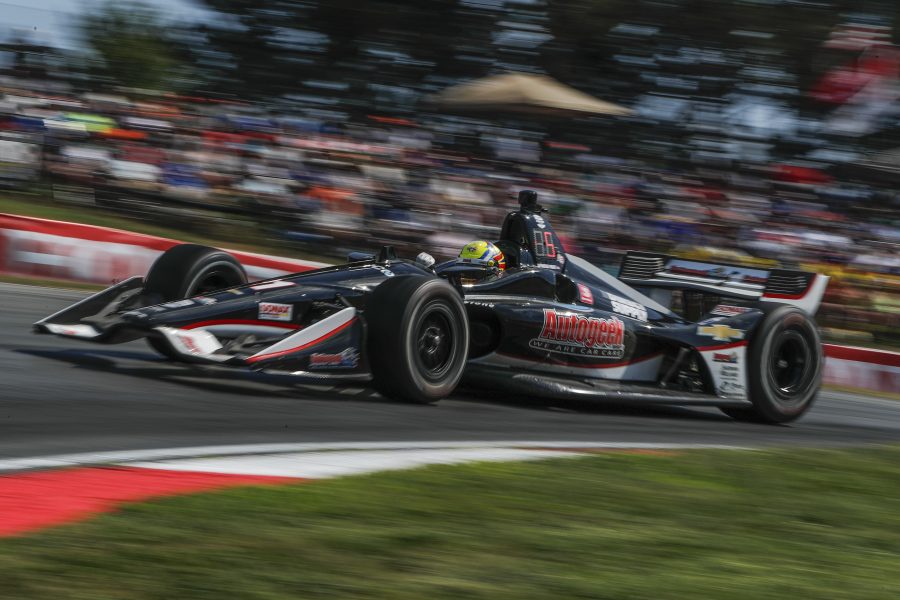 – Picking up positions at Mid-Ohio Sports Car Course has not historically been an easy task. However, Spencer Pigot did not let a less than optimal starting position hold him back from doing just that in today’s Honda Indy 200. Through smart strategy, strong pit stops and outright speed, Pigot would finish six spots higher than where he started and bring home a 7th place result.

– Pigot was in the Top 10 in all three practice sessions, finishing Practice 1 and Practice 3 second on the charts. As he had not been able to get a solid run in on the red Firestone Firehawks prior to qualifying, his run was adversely effected. He qualified 13th, but was back near the top with the 4th fastest lap of the warm-up session earlier this afternoon.

– Committed to a three-stop strategy from the start, Pigot began the race on a set of black Firestone Firehawks. He settled into 12th, but powered forward as the other cars on reds made their first stops. He stretched his opening stint to Lap 27, just a handful of laps after he passed Alexander Rossi for the 4th position.

– Pigot’s next stint would see him on a set of sticker red Firehawks. Excellent work by the No. 21 Autogeek Chevrolet crew, as well as strong in and out laps, would vault Pigot past Will Power and eventual race winner Scott Dixon. As the first set of drivers made their second stops, Pigot again cycled forward.

– On Lap 45, Pigot became the leader of the Honda Indy 200. He stopped before the lap was completed, again having a set of sticker red tires at his disposal. Though he worked his way back up to 4th before his last stop, he wanted to stay on the same strategy as the other cars he was fighting for position. The No. 21 crew responded quickly when they saw other leaders pitting on Lap 63. Pigot dove in for scuffed blacks on short notice, ultimately landing 8th as everyone made their final stops.

– Despite having less push-to-pass remaining than Colton Herta behind him, Pigot held off multiple charges while still closing in on Simon Pagenaud ahead. The three would remain nose-to-tail for over 20 laps. On the final lap, Josef Newgarden went off course at the exit of Turn 2. Pigot would pick up that position and finish 7th, matching his best finish at Mid-Ohio from his rookie year of 2016.

– Only four races remain in the 2019 NTT IndyCar Series championship. The 2.5-mile triangular oval of Pocono Raceway is up next in August 18.

SPENCER PIGOT, No. 21 Autogeek Chevrolet, Finished 7th: “Coming home seventh is not a bad result! It was an interesting race, but it was also tough. I would have liked to have started higher up this afternoon, but to pass the cars we did and have that pace, it was really encouraging. The car was great and everyone at Ed Carpenter Racing did a great job with both the strategy and the pit stops! A lot of positives to take away from this one. It was a lot of fun, pretty much 90 laps all out. We were trying to leap frog people in the pits and pass them in the pits. It was entertaining for me, I hope it was for the fans as well!”