Pigot Taken Out Of Contention at WTT Raceway at Gateway 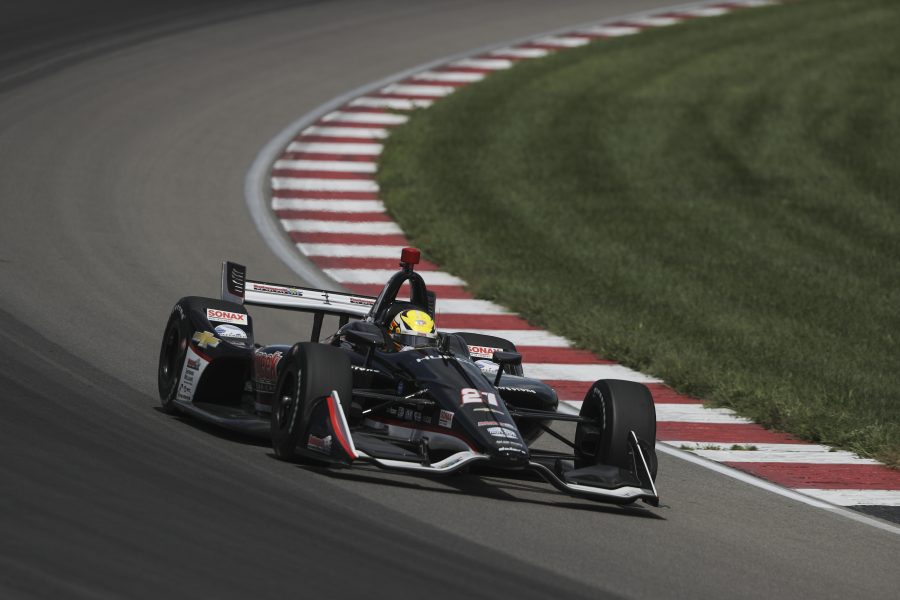 – World Wide Technology Raceway at Gateway played host to final oval race on the 2019 NTT IndyCar Series calendar, but contact with another competitor would cut Spencer Pigot’s race in half. Pigot had raced his way into the Top 10, but his night would come to an end just after the midway point of the race.

– Pigot earned the 13th starting position, gained nearly mile an hour of speed from practice to qualifying. On only the second lap of the race, the first caution of night occurred. Once the race restarted, Pigot settled into 12th, remaining in that position for the duration of his first stint. He made his first pit stop Lap 47.

– The second caution flag of the night flew as Will Power got high in Turn 4 and made contact with the wall on Lap 55. Pigot was a beneficiary of the wave-around and got back on the lead lap. During the yellow, Scott Dixon entered the pit lane with an issue and Pigot picked up the position.

– Alexander Rossi worked his way around Pigot after the Lap 69 restart, dropping the No. 21 Autogeek Chevrolet back to 12th. Again, he held the position for the duration of the stint. His second stop occurred on Lap 95 and he used new his new tires to surge forward. He passed race leader Santino Ferrucci, putting himself in a position to easily regain lead-lap status. As pit stops cycled through, he were scored on the lead lap again starting on Lap 119. Quick work by his crew, as well as fast in and out laps, would help Pigot gain three positions to move up to 9th.

– The caution flag flew again on Lap 121 as Ericsson brushed the Turn 4 wall. Pigot ducked into the pit lane on Lap 124 under the yellow for fresh tires. He only lost three positions, coming out in 12th.

– The race would only go back to green for three laps as Pigot was unfortunately the next car to make contact. While working to pass Charlie Kimball heading into Turn 3, the two touched, which sent Pigot slamming into the wall. He was quickly out of the car under his own power and was checked, cleared and released from the infield care center. The No. 21 sustained too much damage to be repaired and was retired from the event. Pigot would be credited with a 21st place finish.

– The Bommarito Automotive Group 500 was the second in a string of three back-to-back race weekends. From Pocono Raceway in Pennsylvania last weekend to tonight’s race just across the river from St. Louis, a cross-country trip to Portland, Ore. is next. The Grand Prix of Portland at is the penultimate round of the 2019 season will be contested on September 1.