Pigot Rebounds to Finish 6th in Portland After Lap 1 Contact 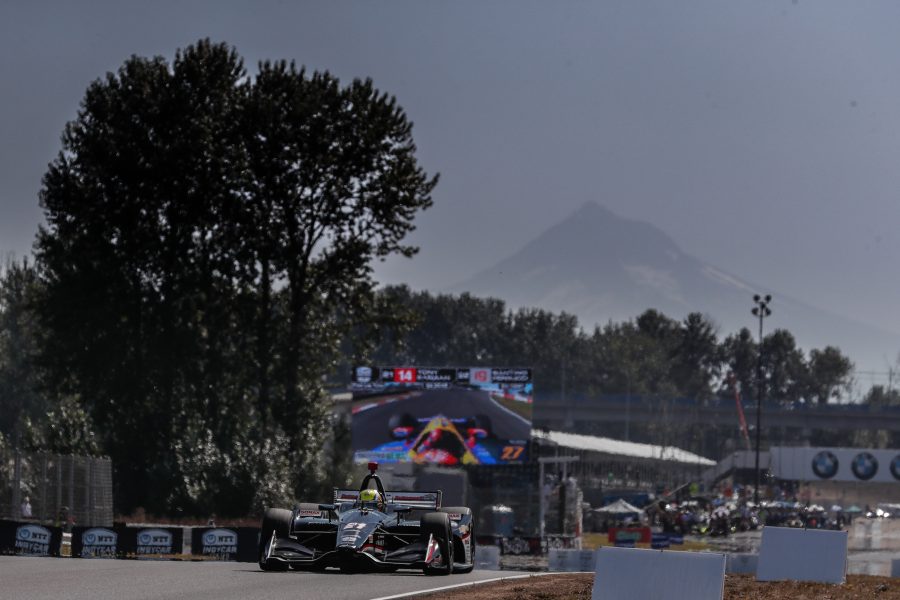 – The first corner of today’s Grand Prix of Portland was not a kind one to Spencer Pigot, but he rebounded to bring home a Top 10 finish. Pigot was collected in a Lap 1, Turn 1 collision that cost him eight positions and damaged his No. 21 Autogeek Chevrolet. Not only did Pigot regain each spot he lost, he picked up additional and finished 6th.

– Pigot fought through several issues in the opening practice session at Portland International Raceway, setting him on the back foot. The No. 21 crew worked hard to help him gain speed across each of the next three sessions. By yesterday afternoon’s qualifying, Pigot was able to advance to the second round and earn the 10th starting position.

– Heading into the chicane on the opening lap, Graham Rahal made contact with Conor Daly. The two slid across the track into the right side of Pigot’s No. 21, spinning the car and damaging the bodywork. The contact dropped Pigot to 18th, but he was able to continue. When the pit lane opened on Lap 11, Pigot topped off on fuel while the crew inspected the car for more damage.

– The race restarted on Lap 12, but remained green for only one lap. Spotters helped guide Pigot through another Turn 1 incident. He was 14th when green flag conditions resumed on Lap 17. He then used his opening set of red tires to carve his way through the field. By Lap 20, he was back up to his starting position of 10th; Lap 30 saw him up to 6th. He held the position for 10 more laps before making his second pit stop on Lap 40 for a set of sticker black tires. After the stop, it was discovered that Pigot drove his entire first stint with a broken right rear wheel.

– After his second stop, Pigot rejoined the race in 14th. As stops cycled through, he was back into the Top 10. Again he raced forward, this time on black tires. He worked his way up to 6th before his third and final pit stop on Lap 73. A solid stop by the No. 21 crew allowed Pigot to retain the position.

– A late-race caution set up a five-lap shootout to end the race. Pigot and the rest of the Top 10 did not pit. Behind Pigot was Simon Pagenaud on red tires, but Pigot was able to stay in front of him. At the conclusion of 105 laps, Pigot would bring home a 6th place finish.

– The NTT IndyCar Series will have a brief break before the season finale at WeatherTech Raceway Laguna Seca. There, Pigot will conclude his 2019 season with the Firestone Grand Prix of Monterey. NBC will air the race on Sunday, September 22nd at 2:30 p.m. ET.

SPENCER PIGOT, No. 21 Autogeek Chevrolet, Finished 6th: “It turned out to be not too bad of a race! After getting hit in the first corner, I did not think we would have much of a chance after that. We definitely had damage to the car, but it handled alright. We were able to have some good pit stops, good strategy and ultimately good pace. We got through the field and worked out way up to 6th, which is not bad considering where we were after the first lap. It makes you think ‘What could have been?’ but hopefully we can have another strong race at Laguna Seca.”

Like Loading...
Previous PostCheckered Flag Falls on Pigot's 2019 NTT Indy...
Next PostPigot Taken Out Of Contention at WTT Raceway ...